It would be so much simpler if we could hibernate during January and February, wouldn't it? It's just too frikkin' cold to leave the warm, toasty house now. Clicking on photos enlarges them. 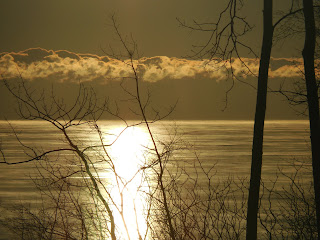 Because it almost looks like it's a black and white and "old style" photo, I love the colors of this shot. It's actually taken a little later than the three below after the sun had risen a bit more. 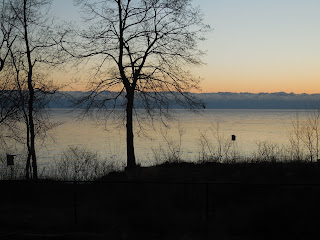 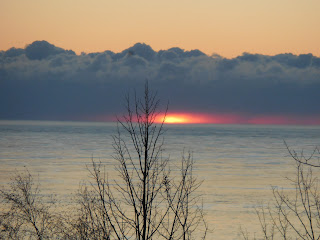 The dogs are reluctant to go out and stay out now. Pretty smart actually. I like to go out with them but this morning we didn't stay out long - maybe five-ten minutes. I could feel the cold on my face. Good books and some favorite DVDs keep me occupied. There are chores to do outside but they'll probably wait for March or April now.

When the dogs raced outside this morning, they surprised the Bald Eagle who was sitting in a large north forest tree. I should have looked first! He circled and then flew off to the south probably to his favorite cove 1/2 mile south of me.

On my last visit to the doctor, my blood pressure was high so I've abandoned coffee completely and now drink sleepy-time, non-caffeinated teas and they seem to be working. I figured that if the caffeine was one of the causes of the high scores, then beverages designed to lull one would do the opposite; it seems to be working. 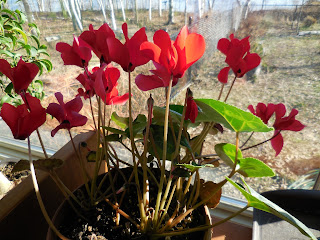 A lifetime ago I donated two Royal Oak Farmers Market cyclamens to sit in the two windows of Fritatta, my favorite brunch restaurant in Clawson, Michigan. They did well but were tossed when they stopped flowering. I rescued this one and it has continued to produce wonderful flowers with very little care ever since. It must be at least five or six years old. 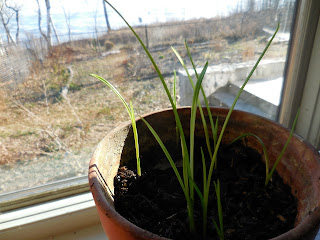 My all time favorite daylily called Autumn Orange by Langhammer  does a spectacular job for me and seems to breed true. At the end of November I rescued a few seeds and planted them. I don't know if the winter sun will make them strong enough to survive in my office window, we'll see what happens. I got my very first Hostas from Smith, my west neighbor and that got me hooked. Now I know that those Hostas are a species (wild?) from Japan - Hosta ventricosa. He had two kinds of H. ventricosa, the original one and a mutation that produces variegated leaves in the spring but gradually turn to solid green by summer. I had to get four new tires because my old ones were losing air and pressure. After dropping off my car in Deckerville, I walked to a nearby cafe for breakfast - definitely NOT Fritatta. On the way I spied several dried and dormant H. ventricosa plants planted along the side of a building. Although the leaves were gone and the seed heads looked pretty bedraggled, I picked a few pods and put them in my coat pocket. I recently planted those tissue paper thin black seeds and they promptly germinated. What fun! They're crowded now but I do think they'll make it and I can plant them out come spring.

The catalogs have started arriving - perfect planning on the part of gardening companies. I look forward to perusing those catalogs over and over and over. After many decades of buying small plants, I now tend to try an buy plants as large as possible now - so I can enjoy them.
Posted by Jaime Hansen at 8:25 AM