I can't imagine why this shot made me think of the Munchkins!! 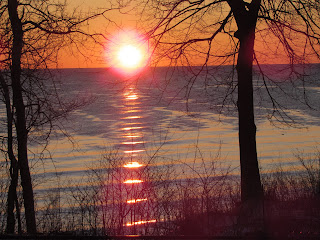 It's still very cold here, twenties this morning. Overnight the surface of the lake forms a thin sheet of ice in places where the water isn't roiled by waves leaving a few patches of very, very thin ice. Clicking on photos enlarges them. 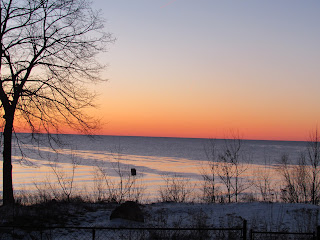 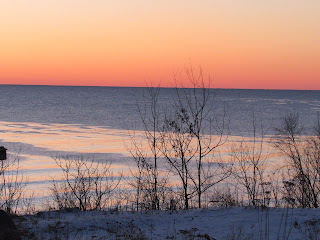 Male Red-Wing Blackbirds have returned to stake out their territories this year - perhaps they came a bit too early this time. They're competing with birds like cardinals, juncos, titmice, nuthatches, chickadees, downy woodpeckers, hairy woodpeckers, red headed woodpeckers, brown creepers, mourning doves, et cetera. who've been here all winter for the seeds, yes, SEEDS. Only males have the red bar; females don't and look a little like large sparrows. Males display the red band when announcing their territories but as you'll notice, they can also almost hide the patch at moments when they are in close proximity and not fighting for nesting spots. (There's also a narrow band of yellow.) 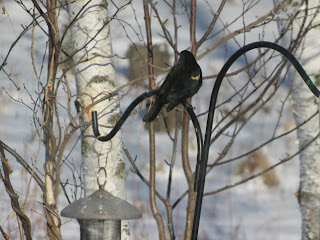 Soon the view through my north forest of Lake Huron will be hidden by leaves - so it's important to enjoy it now while the lake's still visible. Much of the snow from last week's blizzards has melted  - again. I'm anxious for my little evergreens to start growing their spring candles again. I've already trimmed off the lowest ring of branches from each tree in an attempt to spur upward growth. I even trimmed one of my horse chestnuts seedlings hoping for the same result. Some of my young rhododendrons flowered last year; maybe there will be more flowers this year. I lost four trees this winter. I leave them on the ground to serve as food for many little creatures and so the nutrients trapped in their trunks will enrich the soil for the next generation of plants and animals. Ah, the circle of life. 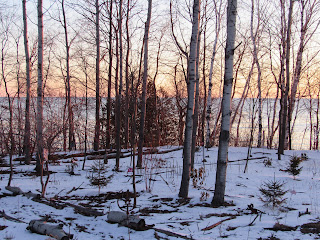 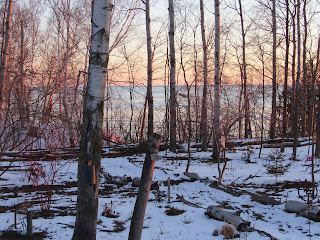 Stephen Hawking died this week. I believe he was right - humans must leave this planet and begin living in space. Of course, most of the billions and billions of us will remain behind. There are way too many of us and we are inevitably, and faster and faster,  destroying life as we know it on earth. Fortunately the earth will survive the anthropecene era and continue on its merry way racing through the cosmos.