It took me a while but yesterdayI finally succeeded in sending by UPS (United Parcel Service) a document that I tried to mail via the USPS (United States Postal Service) about ten days ago. The document had to travel from Bad Axe to Plymouth Michigan - a distance I could have driven in under two hours. The mailing never arrived - at least yet. So I re-did the document and took it to UPS. I just wanted to come back home and take a long quiet nap. Thankfully Doug at Ace Hardware - where the UPS is located - was extremely helpful. Some friends promised to send me some masks about three weeks ago and they still have not arrived. I get it. I totally understand. The United States Postal Service, USPS, apparently started by Ben Franklin, is struggling because of the corona virus and because some politicians want to close the USPS and/or de-fund them. 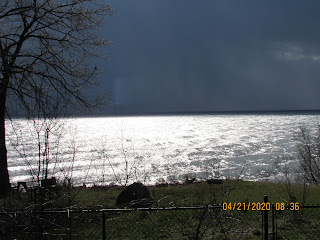 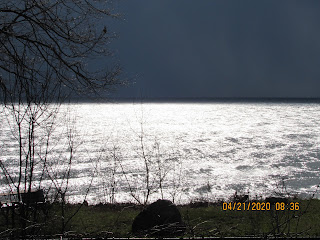 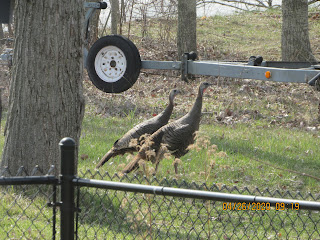 A small group of wild turkeys landed on my front yard and did some exploring before the dogs scared them away. They are regal and very strong fliers. I doubt the supermarket turkeys could get off the ground. Clicking on photos will enlarge them. 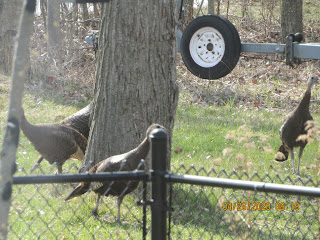 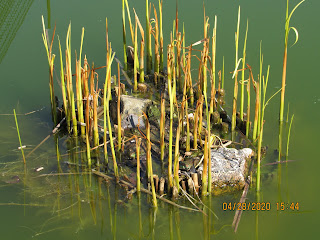 The emerging cattails provide some cover for four bullfrogs who made it through the winter this year. There could be more - it really has been a late spring for us here and some could still appear. Can you find all four? 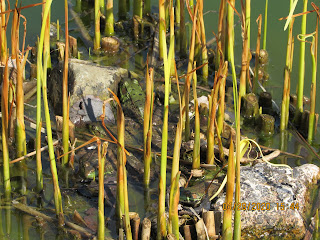 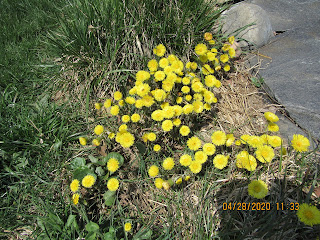 I realize they look like dandelions but these lovely flowers arrive in early spring before the large leaves appear. Happy yellow. I have no idea what the plant is called; I love it though. 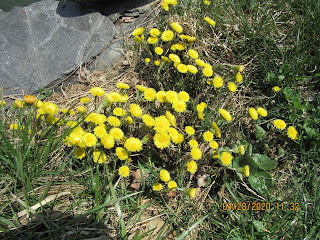 My cousin Carlo in Denmark sent me the scientific name for my yellow flowered plant found by a stream in the wilds of Michigan's Thumb. Tussilago farfara, coltsfoot, coughwort is a Eurasian native and has been used for centuries, millennia, as an expectorant, a sore throat soother, a cough suppressant.The composite flowers appear in early spring and are followed later by large-ish 4" leaves with pointed tips that somewhat resemble a horses's foot. The Danish word for this plant is Folfod. Fol is a young horse (foal) and fod is foot. So foalfoot if we were to translate literally perhaps.

The seeds do resemble dandelions but the plant is not as invasive. Sometimes in years long gone the seeds were used to make pillows. I would love to know how this plant made it to North America and how long it's been here. Perhaps centuries as a "home remedy"?
https://en.wikipedia.org/wiki/Tussilago. 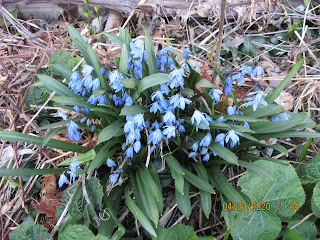 I have a few Siberian squill scattered around the yard. This is a volunteer that grew in a mulch pile. I am envious or cousin Carlo's Scilla shots. Perhaps one day . . . 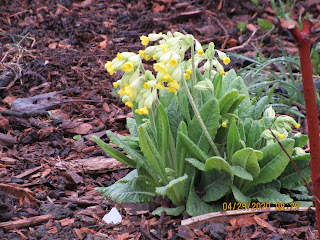 I think this primrose is Primula vera. It does very well here but so far hasn't spread or volunteered any new plants. In my previous home there were several volunteers. Perhaps with time . . . 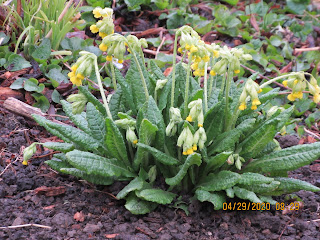 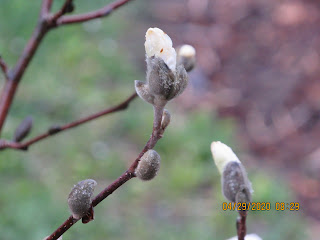 I think I like the emerging magnolia buds as much as or perhaps more than the actual flowers. Like giant puppy willows. 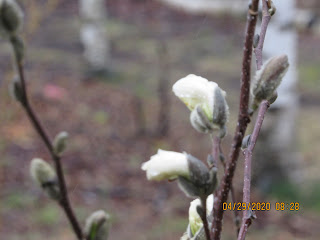