Icelandic Sheepdog Kit and I were very busy Wednesday, Thursday, and Friday last week in the fog. On Wednesday and Thursday we drove to East Lansing to have her hips checked using the PennHIP method which I much prefer to OFA. Her scores are L=0.40-R=0.38-PH which is about what I expected considering her parents and ancestors. That's pretty good, in my opinion.. On Friday we drove, again in the fog, to Novi where there was a dog show in progress to have her eyes CERF checked; they are normal. I talked a while with Michelle who also has at least one Icelandic Sheepdog. I wanted to wait to have those tests done until her official name change came through. 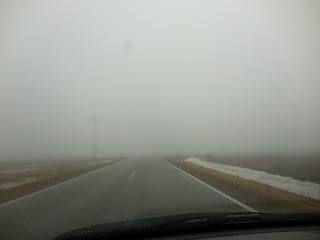 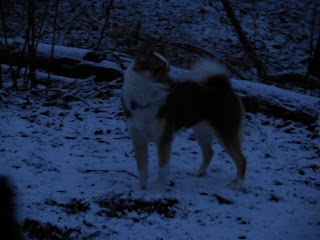 I have been thinking about breeding Kit. She's a sound animal both genetically and temperamentally. If you've been following my blog you know that she was returned to me at about a year and a half of age with a vague she doesn't fit my goals. (I paraphrase.)  Vinlands Pila was returned to me at about the same age and I exchanged a nice male for her. Bear, Bersi av Isheim, arrived as a bequest from Norway/Sweden after his mother passed away. Bear and Pila had one litter: Vinlands Arne and  Vinlands Lille-Mora went to Europe and have been bred producing amazing puppies, Vinlands Erik went to Ohio, Vinlands Leifur stayed in Michigan and did very well. I've been thinking that when I get some excellent dogs as unexpected surprises or bonuses, I've been very, very lucky so maybe I should take advantage of that good fortune and breed Kit. 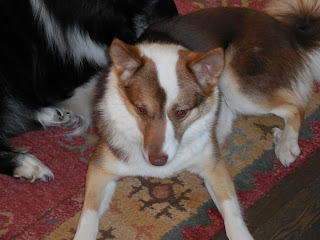 I honestly thought my Icelandic Sheepdog breeding days were done. I had been thinking that in my mid-seventies now maybe I needed to relax a bit. Breeding and raising puppies is not easy.
Finding good homes is always an issue for concern. Icelandic Sheepdogs are very active dogs, very intelligent dogs, very loving dogs. They are not for the meek owner/handler family. They are a rather primitive breed having changed very little since the Vikings took them to Iceland more than a thousand years ago so they have many of their instincts intact. I have really enjoyed experiencing working with those ancient dog/wolf instincts; I try very hard to make my puppy buyers understand what they are getting before they commit. 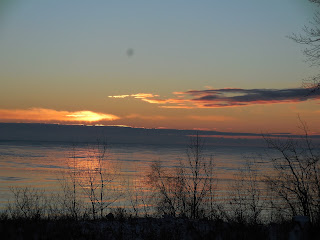 Raising the puppies properly is not my main issue. I believe I can still do that.

I have been casually looking for the right boyfriend to use with Kit. I would prefer not to use a dog from the club's stud page. I think we need to expand the gene pool which means ideally I would like to use a boy that is not "popular". I also believe strongly that puppies in a litter should show diversity in temperaments, genetic backgrounds, fur length, color, etc. I prefer natural breedings but with so few dogs in the US and Canada I am open to using A.I. (artificial insemination). I do like trying new (to me) things.

Many Icelandic Sheepdog females have irregular seasons. Many (most?) "modern" female dogs have seasons spaced six months apart. Some of my girls have had six months separating seasons but most have seasons that are seven, nine, or even eleven months apart. If you think of the extreme weather conditions in Iceland, that makes sense, doesn't it? If a dog always has seasons six months apart and those seasons always arrive during harsh weather, well then her puppies would have a hard time surviving; maybe none of her pups would live. When will Kit come into season? I simply just don't know. 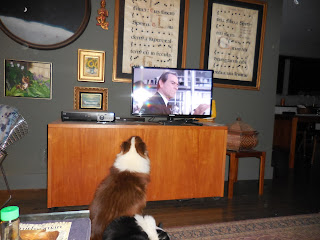 Bear LOVES watching TV. He especially loves programs, DVDs, ads with animals. Bears, horses, cattle, cats, African animals, and, of course, other dogs are his favorites. They can be real or cartoons. Doesn't matter. He also watches people. Loves to hear them talk. The other dogs always sleep when we watch TV - unless we have popcorn. He always, always watches. 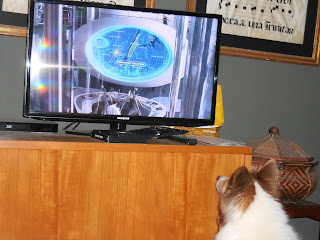 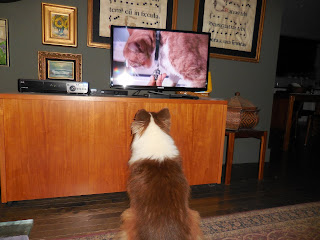 There is much beauty in winter, as my friend Christine reminded me. I have many red-twigged dogwoods scattered around, all volunteers.  Their twigs, as you know, are green in the summer but turn red after the leaves fall and it turns cold. Clicking on photos enlarges them. 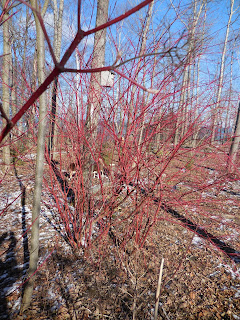 In the winter Rhododendrons' leaves curl up when it's cold. The colder, the more they curl. I suspect the curling reduces water loss from their leaves. This lovely looking plant looks like it will have loads of flowers next spring as evidenced by the large terminal buds 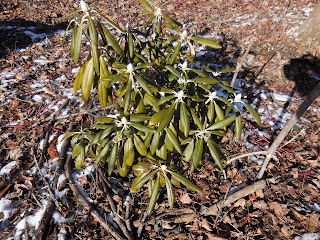 If you know of a nice boy for Kit, near or far, please drop me an email: jaimehansen1@frontier.com