I should be in classes today, two classes. School is closed so I have time on my hands. I suspect it will be months, not weeks, until school reopens.

Yesterday I spent trying to sort out the HUGE price increase for one of my medications. Last year it was about $25 for a three month supply. This year I was initially told it would be $167 for a one month supply. Why are we paying so much for health care. (Note the lack of a question mark. I know the answer. Greed.) Bernie, Elizabeth are right. No other first world country seems to pay what we pay. Insurance companies are NOT our friends. I wonder if they absorb half of what we spend as pure profit as has been suggested.

A friend sent photos of crocuses in her yard. While my own crocuses have a way to go still. I live further north, my hope springs.

Speaking of . . .  a few months ago I bought a male singing canary from Kelly Villaneuva of Kelly's Pet Salon. The plan was to think springy thoughts in the dead of winter listening to his cheerful songs. Alas. He is a she and is more likely to lay a egg than to sing like a male. Regardless. Clicking on photos will enlarge them. 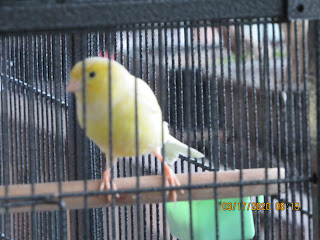 Temporally she has a cage partner. A while ago a small bird flew into one of my windows and was knocked unconscious and broke a wing. The dogs rescued, their word, not mine, it and brought it into the house, wet and slimy. When it's recovered it will re-join its outdoor companions.

Two weeks ago I cleaned out my bluebird/tree swallow houses. Kathy had told me that she had just done hers so I thought that it was time to do mine too. I have always thought that the tree swallows arrived before the bluebirds and snatched up the available houses. Now I'm not sure which species gets here first. I love to watch the swallows swooping though the skies excited to begin courtship and nesting activities. However, this year the bluebirds seemed to have arrived first. The truth? I don't really which species gets here first. Maybe in the past the early bluebirds have arrived and moved on before I see them. Tree swallows seem more insectivorous while bluebirds seem perhaps more omnivorous. Insect eaters would have a harder time arriving early, fewer insects. Omnivores could rely on overwintered seeds and berries if insects are still dormant. Makes sense so that might be true. 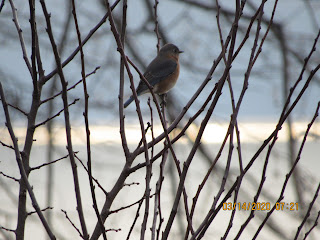 My Michigan Bird Life book published in 1912 writes that the bluebirds, Sialia sialis sialis, first nests appear as early as the first week in April. (It has been driven from much of its historic range by the introduced English sparrow and also by red squirrels which prefer the same kind of cavity nest.)   The photos below show a female. 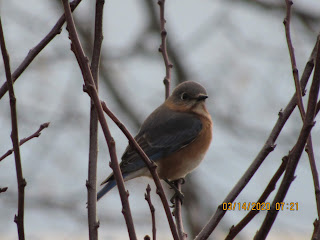 Tree swallows, Iridoprocne bicolor, arrive in large flocks from late March to the middle of April according to the book which also states they like to line their nests with white feathers. Cleaning out the boxes proves that point. 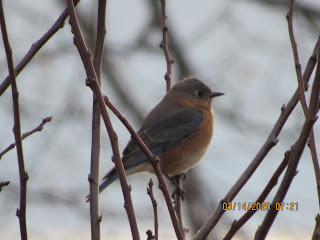 My own birdhouses - on metal stakes scattered throughout my yards - typically have one, sometimes two broods of young. The parents sometimes rest on the electric wires recovering from their sweeping up on the wing of flying insects for their youngsters' food. After the young have fledged, they often join their parents on the wires with as many as a few dozen parents and offspring from "my" nest boxes resting on those wires. Sometimes one clutch of tree swallow youngsters is followed a few weeks later by a clutch of bluebird young in the same nest box. 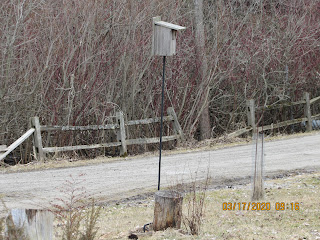 In addition to bluebird/tree swallow boxes, I also put out many house wren, Troglodytes aedon aedon, boxes - which also have to be cleaned out annually. I do NOT mind that job. It allows me to see how many houses have been occupied the previous year. Usually. Most. If not all. And house wrens have a lovely song. 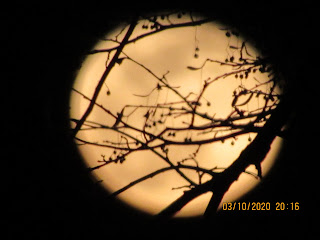 The shadow stripes of clouds cast on Lake Huron and the waves' white caps created a perfect picture recently. The water levels of the Great Lakes have apparently never been higher. Is that a result of climate change/global warming one wonders. Is this to be the new normal. Erosion is seen all along the coastlines of all of the Great Lakes. It seems like we have more than "normal" rainfall for a few years now making agriculture problematic for quite a few farmers. Many fields have had drain tiles dug and placed in the fields in an attempt to prevent local flooding and subsequent crop loss. 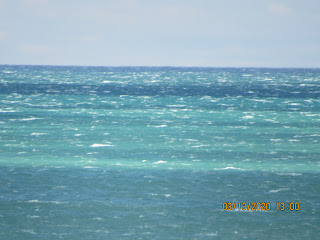