My gorgeous Icelandic Sheepdog Vinlands Ulfbehrta Kit yesterday evening. She's also a very active and affectionate girl. She recently had her genes for color tested and she has one gene (aw) for wolf sable and another one (at) for black & tan. That makes her a "wolf sable chocolate and white" dog. Clicking on photos will enlarge them. 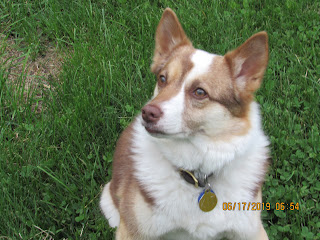 Normally when I'm gardening the dogs find a comfortable place, usually right IN the garden on some plants, to settle down and watch me pulling weeds and raking the soil a bit. (They think I'm crazy; they may be right.) As I was gathering up my favorite gardening tools to go into the house I noticed that Bear was very interested in a depression at the base of a tree. Going over to see what had piqued his curiosity, I found a fur lined depression in the ground - not a tunnel, just a small U-shaped hollow. I figured out right away that it was an abandoned rabbit nest from last winter.

I was wrong. This morning Bear and Korpur immediately went to the same depression and began sniffing around so I looked more carefully and found one dead baby rabbit. Perhaps the rest had escaped. I make no secret about it: I am not fond of deer and rabbits. Last year they decimated my vegetable garden; I decided NOT to plant another garden of peas, beans, zucchini, onions, broccoli, swiss chard, brussel sprouts, butternut squash, etc. After all, deer and rabbits were here before I came into their neighborhood. Trying to beat them at the game they invented is probably not a good idea.

Last year I had a bumper crop of concord grapes. There were so many that I had begun thinking about making either grape juice or grape jelly. Then one morning I noticed that all the grapes were gone. Problem solved. This year I think I will have even more grapes with the same result - - I hope. I've been down that preserving foods road before. That's a lot of hard work. I liked doing that kind of stuff with my partner when I was young. Now? Alone. Not so much.

That's why when I saw this Cedar Waxwing in my large crop of cherries, I smiled. Another potential problem solved. The bird tested several cherries but they weren't ripe so they were left alone maybe he/she is biding his/her time.  Some things I do not mind sharing with my feathered or furry neighbors. I suspect the waxwings also got the grapes last year. (Maybe you remember their plundering of the Viburnum berries in late winter?)Que sera, sera. 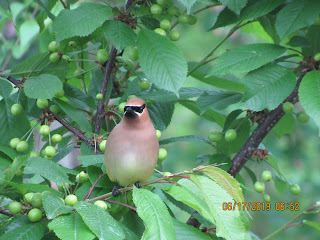 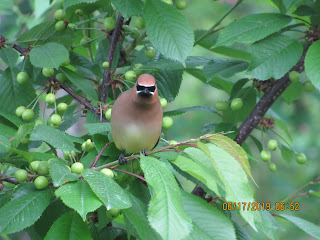 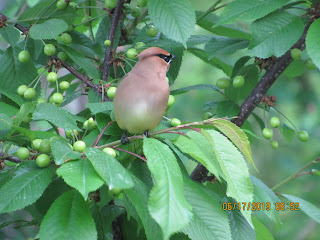 The bird activity here is frenetic. There are at least three species of sparrows gathering nesting materials. One pair is building a nest in one of my now maturing mockorange bushes. Oddly, at the same time a pair of robins is assembling a nest in the very same bush. I suspect that this is the robbins' second nest. The first was crow-destroyed. Ah nature. A crow also has tried and failed to get babies from one of the houses occupied by a pair tree swallows. Even the flickers seem to be more actively pursuing ants as if their eggs may have hatched.  Soon I should know, eh.

A brazen and bold house wren just successfully chased away a larger downy woodpecker that had the audacity to hunt for bugs on a tree near its nest box. Then only a few minutes later it had to chase away a red headed woodpecker. Tough little wren to attack and beat large, much larger birds, and they are birds with strong pointed bills too. 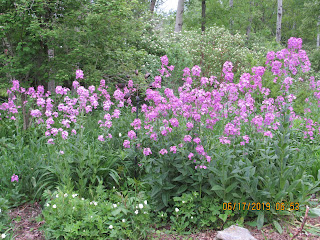 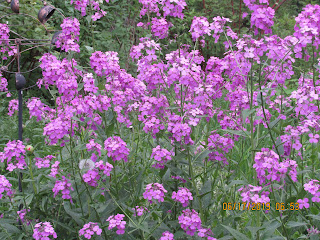 Similar to the chives/rhododendron color issue, my Dame's Rocket is flowering now and producing a lovely lilac-like perfume into the air. Only a wild flower but they will always have a spot in my garden. They volunteer. At least they are not invasive like the wood anemones I mistakenly brought in a few years ago. 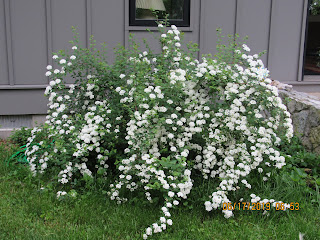 Usually, normally, I place my plants carefully looking up for overhead wires that trees might grow into one day, carefully spacing small bushes that will grow into large ones so that they will not eventually crowd one another, bushes that will like sun must be planted in a space where they will be lots of sun, ditto for shade lovers. However, sometimes I make mistakes. Human!. This gorgeous spiraea  is growing under the roof's drip line. Nonetheless, even though it gets damaged by falling winter icicles, it's a graceful bush that always looks good regardless. Its cousins out in the full sun will do better but it will stay in its own spot. I love these bushes, they remind me of childhood. We must have had one in a corner of the yard. 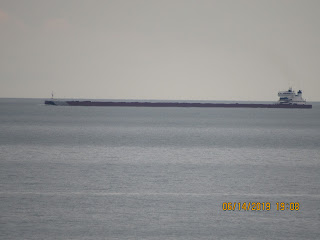 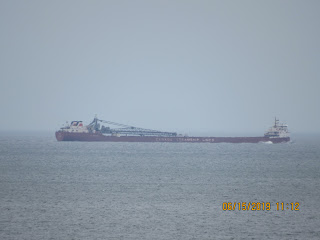 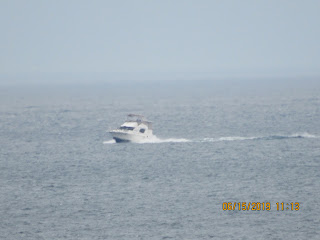