This just came! It's really hard to believe the Loa is seven!!
"GOOD MORNING!

Fred and I are celebrating Loa's birthday today.
Seven years ago on this day I went to the airport to pick up this tiny creature.
What a journey!
Thank you to Korpur, Kria and YOU for a wonderful little dog!
Annette"

My wild "white" (it's really very light pink) rose has started flowering and it has a great perfume! However, it partially blocks with its very nasty thorns, for humans - not dogs, the path in the North Woods. 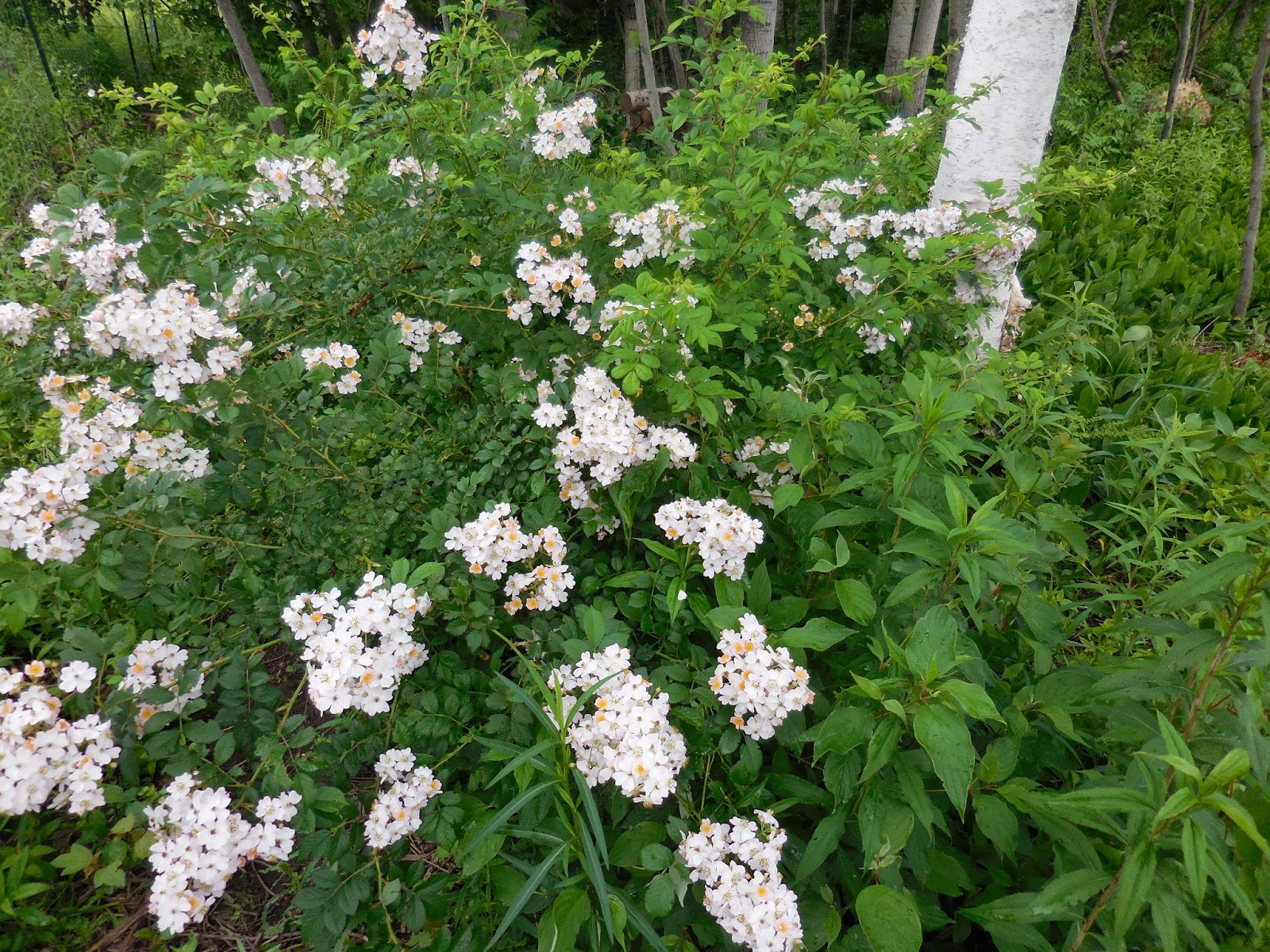 Last summer I bought four very small Paw Paw trees, each one was a different variety and grafted onto a probably common rootstock, from a man at the Royal Oak Farmers' Market. I moved them up to San Salvatore and heeled them in for the winter. All four survived - amazingly and surprisingly. They have been extremely slow to start growing but  I didn't give up on them. It looks only one survived above the graft but the root stock on the other three has started to produce small nascent buds so maybe they all will pull through. If you ever get a chance to taste a Paw Paw - - take it. The fruit is amazing.

I purchased a small Bosc pear tree; it's been planted but the labeling tag said it was not self-fertile. It has to have pollen from a neighboring pear tree of a different variety in order to produce fruit - as if ever!! I've succumbed to the "old person planting a fruit tree syndrome". Sigh, as a woody mate I just ordered a Bartlett pear tree! Sigh, sigh. 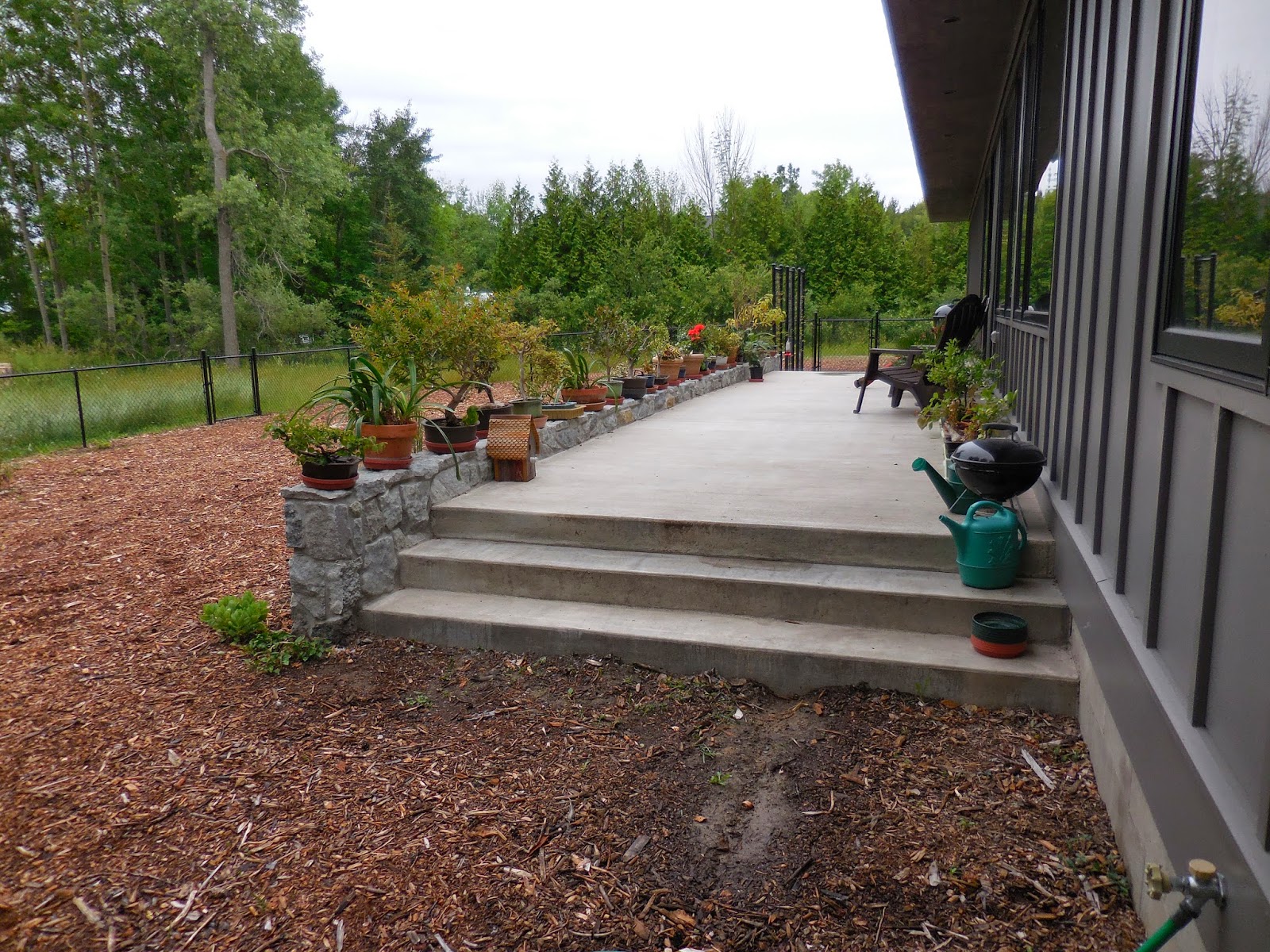 If you look closely at the above photo you might be able to see behind the plants on the Lake Huron porch the pear tree for my partridge to sit in next December. Behind that is the new east fence put in by the aptly named Half Way fence people.

I've been hard at work clearing out the Russian Olive trees, apparently recently P.C. re-named "Autumn Olives", from my acreage. They can grow really nasty 'thorns' and quickly crowd out native American vegetation. While removing the Russian Olive trees last weekend, I relocated two small places I had previously discovered where the native American Clematis had established tentative footholds (root-holds?) and transplanted them to my fence lines where previously I had transplanted from my home in Royal Oak some volunteer auto-vegetatively produced specimens of a Clematis virginiana rescued years ago from North Oakland County. (That is one long and awkward sentence. Fortunately probably no one will actually read it!) I'm hoping at least one of the two new clones will turn out to be a female clone. This species is apparently monoecious, with separate male and female plants. My north Oakland clone is a male. I don't think they will flower this year so I'll have to wait until next year to  know. 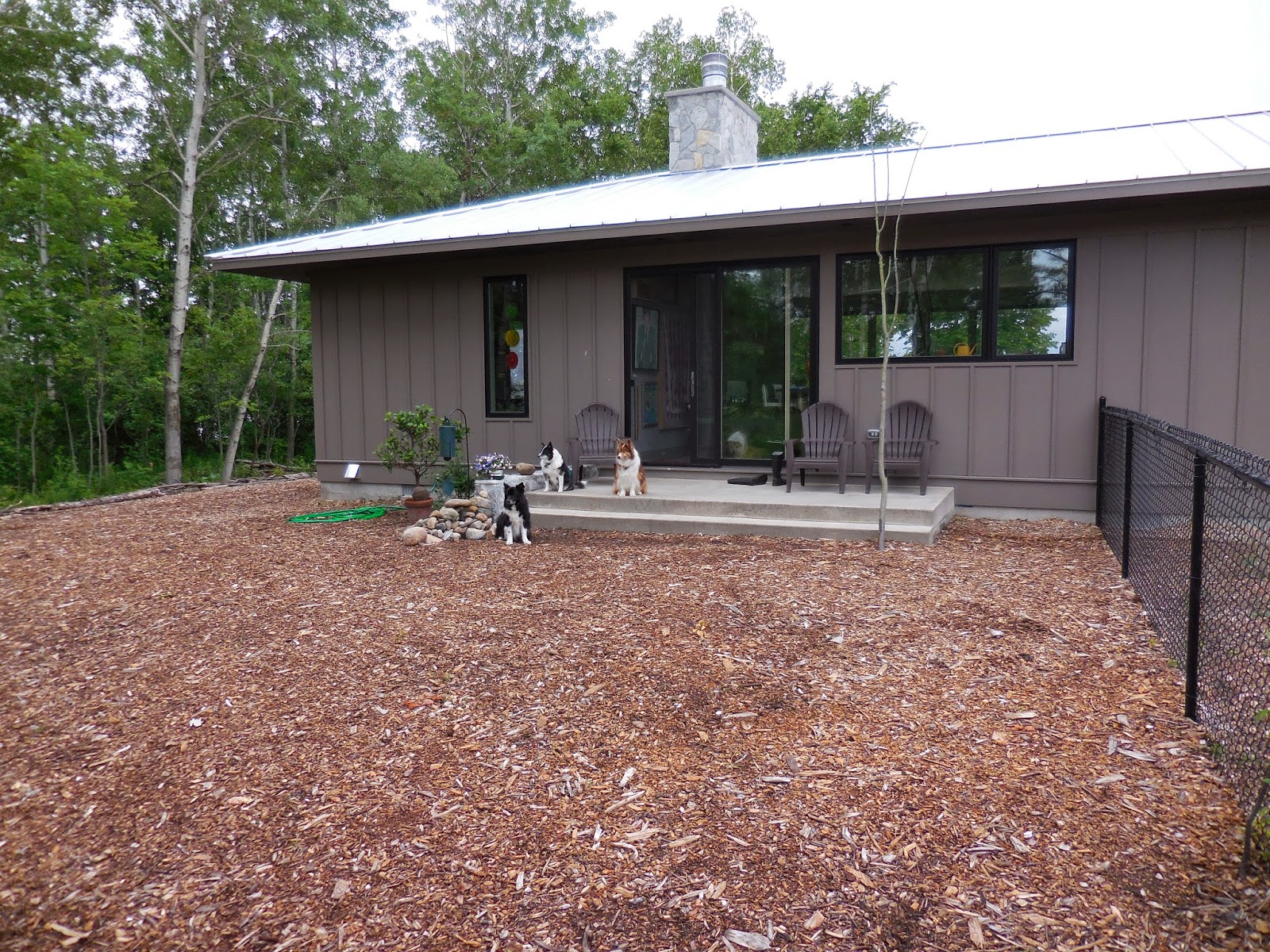 The west porch with ubiquitous dogs. Korpur is on the left above. Willy Nelson named his guitar, now old and much scarred - kind of like Willy (with sincere apologies, Willy), Trigger. Tryggur is the Icelandic spelling. I really wish that I could tell Willy that I've named Korpur's son (seen below)after his guitar. I love that man and his genius, his music. 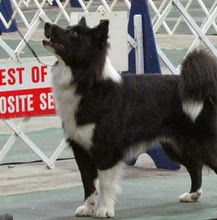 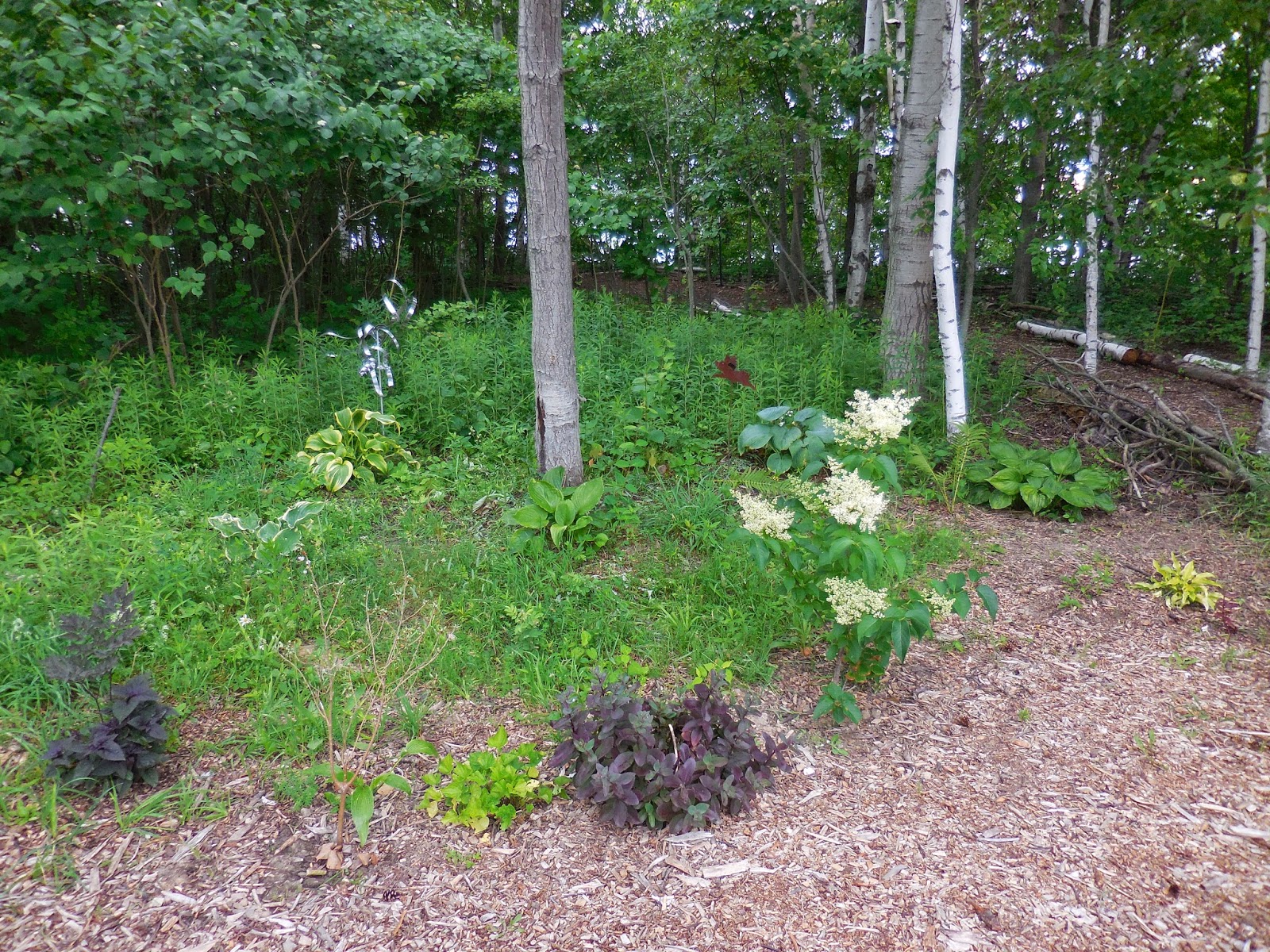 Last fall I purchased a "reduced for clearance" tree lilac and heeled it in for the winter along with the Paw Paws and some horse chestnut seedlings. The tree lilac, planted this spring after I moved in in April, is flowering now. The tiny Paw Paws are also in this area but not visible in this view.

I love, love rainy days because first of all they are good for the garden. Secondly because I have to stay indoors which gives me some time to catch up on inside stuff.

Tony from Thumb Heating and Cooling came Tuesday and fixed (hopefully) the geothermal problem. The original installers - whom I could not contact because their mailbox was full - neglected to put in a moisture trap. It actually says to do that right on the geothermal unit. Tony cut PVC piping and created a trap. I asked him about the filter. The original installers told my builder, Clair Kramer, that the filters would cost almost $30. Each! Tony said ordinary filters would work just great. Raymond Hardware in Port Sanilac had some for $3.00. Serendipitous, not being able to contact "Lakershore", eh?
Posted by Jaime Hansen at 6:20 AM